Hello, dear reader and good morning/afternoon/evening! (To be fair I don’t know when you will be reading this, I have to cover my bases wouldn’t you agree?) If you’re anything like me you love a good mythical theme involving magic. If you add one that’s whimsical and fun on top of that with mechanics that are crunchy and tense and fun to boot? Color me intrigued. Today I am going to write about a game that to me encapsulates all of the qualities I’ve mentioned above. The game I’m referring to is Broom Service by Alexander Pfister and Andreas Pelikan. In Broom Service, the players take on the roles of witches, druids, gatherers, and fairies to try and deliver different colored potions to towers around the map. Players can also charm clouds away and collect tokens for doing that which will give them more and more points at game’s end based on how many they have. You will also have points at the end of the game based on the resources you have in your supply. 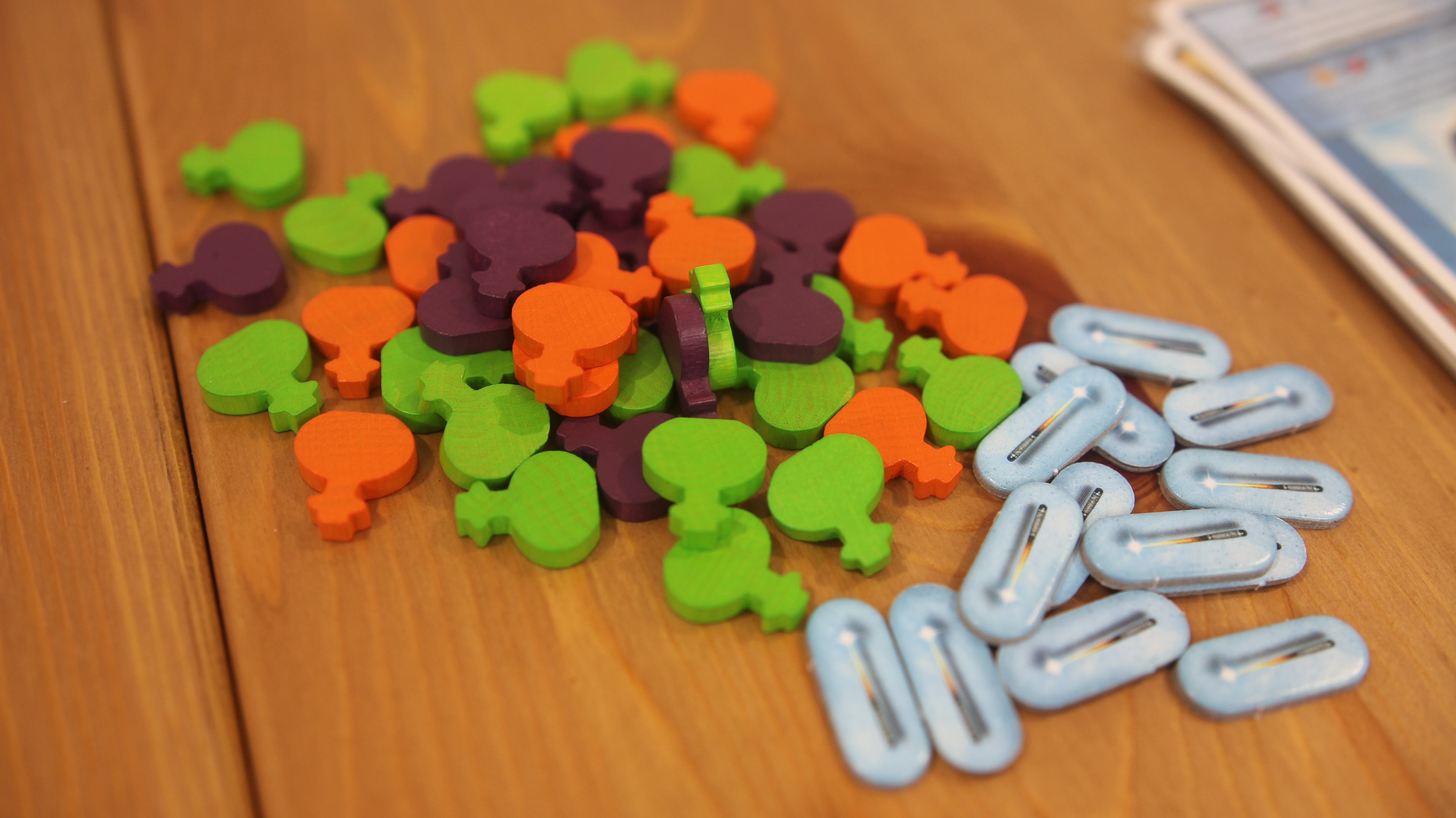 At the onset you may say the game sounds a bit simplistic, you’re trying to move on the board and deliver for points. The thing about Broom Service is that there is a fascinating card play mechanic that utilizes a trick taking style interaction. Each player has 10 cards that are identical, and each person must pick four cards to play each round. When the starting player for the round plays a card, each other player in clockwise order must play that card if they have it. The trick is (see what I did there?) that each card has two options: a brave and cowardly action. 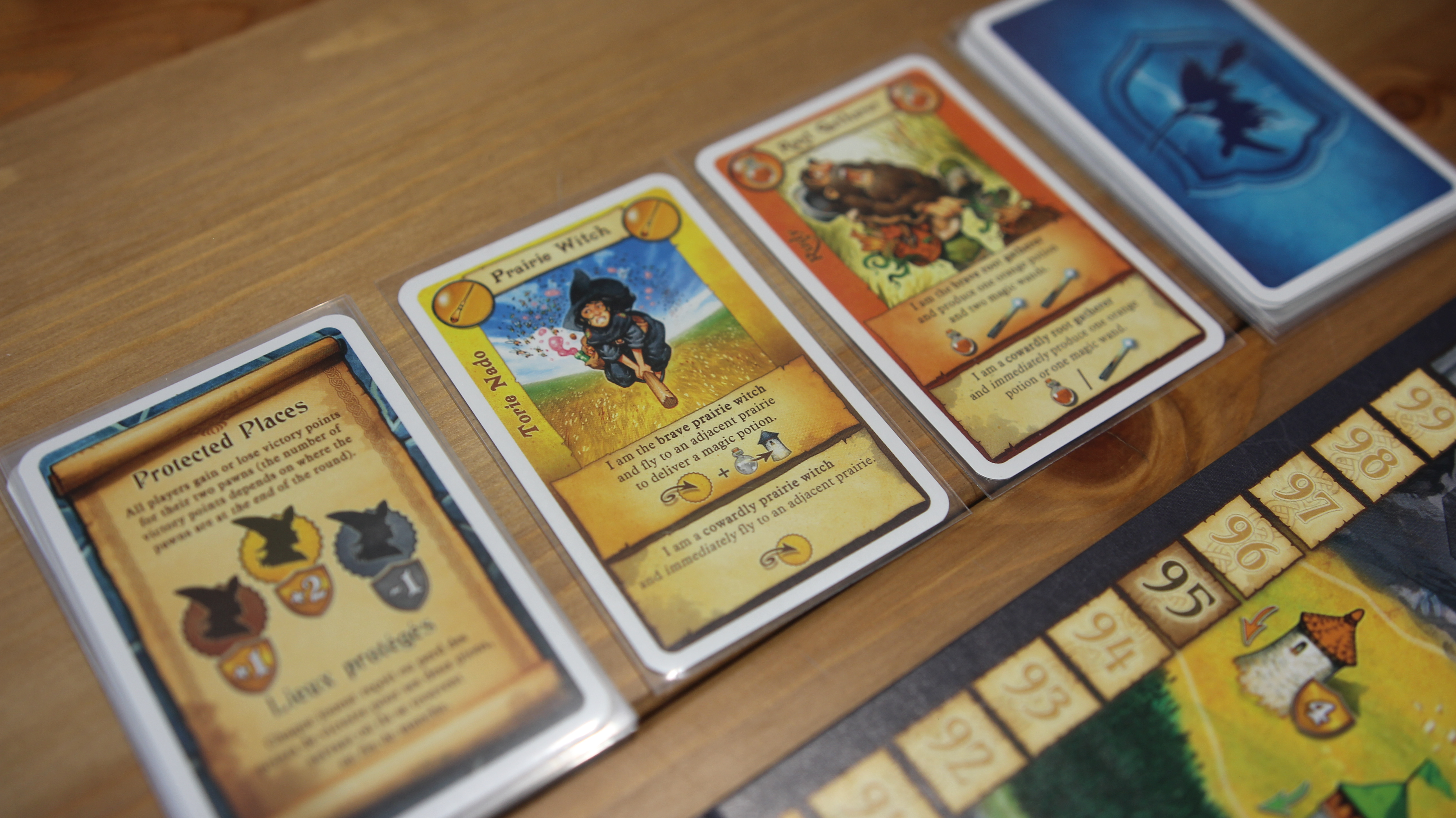 The cowardly action is safe. When you play the card you instantly get to take that action. Then the next person who may have the card plays it and chooses cowardly or brave until all players have chosen. Brave actions are much better than cowardly but there is a risk associated with choosing the brave action. If you say for instance, “I’m the brave hill Witch!”, the person to your left may say “no I’M the brave hill Witch” and play that card. When someone chooses the brave action after you, it cancels out your action and you don’t get to do anything.

This very interesting trick taking card mechanic can create soaring highs or plunging lows for players. If you are for instance one of the lucky few that leads a card and brazenly declares that you are the brave role, and then make it through the gauntlet of other players vying for your points, a great sense of accomplishment and satisfaction can occur. You may end up on the flip side of that coin, however. You’ve played the brave action and made it all the way through the round to the very last play. You then notice the devious grin on that player’s face and the wickedness in their heart as they slam down the role card that you selected and shout “BRAVE!” as loudly as they possibly can. This crushes your hopes almost completely as your plan is now dashed.

This can be a very tough round to go through but one thing I’ve learned the more I play the game is that timing is quite crucial in Broom Service. You have to make sure that you select cards that don’t require a certain chain of events to take place. You will almost assuredly not be able to complete your objective if that is the case. I played quite a few rounds trying to pull off a big combo and optimize my possible points before I learned the lesson; you have to have a safe plan, and a backup plan, and then optimize your points within those plans. You will almost never have things go completely your way, and that’s part of the fun of Broom Service. As an example, you may select the Weather Fairy card thinking “I just need to move here to be adjacent to a cloud” or “I’ll play that card to get more wands and then I’ll be fine”. What always seemed to happen to me is that turn one of the round, someone would play the Weather Fairy making the rest of my actions useless. Once again, this type of strategy required too much going my way, you have to avoid that if at all possible and you will do much better. One of the things that I really enjoy mechanically about the game is the ability to move two pawns instead of one. This accomplishes a couple of things. One, it allows you to spread out more easily to reach more of the board. Two, it allows you to go a different direction if someone is tagging along and making things difficult for one of your pawns. I had an instance in a game recently where a player was moving everywhere I needed to move, or delivering to towers before I had the chance leaving me blocked. I was able to switch my strategy mid game and focus on the other side of the board which allowed me more freedom towards the end of the game. I like this quite a bit because it allows to be flexible and react to how other players will play.

That’s one of the areas where this game really shines. It’s a game that has a Euro feel with the victory points and resource collection but has so much player interaction. This game gave me a feeling similar to Camel Up where everyone around the table was engaged and yelling when certain cards or actions were revealed, or when someone really bluffed well and didn’t have the card at all. The interaction is quite a bit of fun.

There’s a lot of fun packed in this box. There’s also quite a bit of variability packed in the box as well. The game comes with ten event cards, seven of which will be used each game. These event cards provide a different strategy to pursue or limitation to overcome each round. There are also cloud tokens that can be collected for end game points, but some of the cloud tokens also have special requirements that allow for different actions and ways to score points. There are two sides to the board that allow for more variability with travel and there are also different tiles that relate to the land types around the board as well. You can play with multiple variations on both sides of the board to create tons of unique combinations and strategies. Overall for a $45 game, this is quite a bit of content for what you’re paying.

So you have a good feel for the mechanics and some of the interactions but what does this game do really well and what does it do poorly? As my friend, Nacho Libre would say, “let’s get down to the nitty gritty”. One thing that I’m not a huge fan of in the game are the Bewitched cards. This is something that the game incorporates in games with less than five players to steer players towards picking the same cards. What happens is a certain number of unused player cards are turned over each round (based on the number of players) and these cards are penalized for the round. If players choose to play any of the Bewitched cards they lose three points per card. This creates more player interaction which the game definitely does better with. I just don’t always like losing points when playing something that I really need. I will say however that I completely understand why the bewitched cards were needed, they just aren’t my favorite part of the game.

When I really think about the bewitched cards and lower player counts I started to realize that this game really shines at four or five players. It’s fun at two or three it just becomes much more tactical and thinky. At four or five players the strategy is still there but there’s also just so much fun interaction between players.

Broom Service isn’t too complicated to play with younger teenagers which makes it a great choice for a family game that everyone will enjoy. If you want to utilize some or all of the variations on top of that it will create a much more interesting experience with more decisions with every turn. Overall if I had to give this game a numerical rating I would probably round up to an 8 out of 10 based on BGG’s rating criteria. This rating is listed as “very good – enjoy playing and would suggest it”. That statement couldn’t be more true for me. I very much enjoy playing this one and I think you will too. I’ve bought this game for two members of my family and will keep recommending it to people looking for a great family game.

I hope you’ve found the article informative and helpful. If you have any questions email thediceyreview@gmail.com. If you want to know how to play the game I’ve uploaded a how to play and thoughts video on the Broom Service BGG listing and I’ve posted it below. Thanks so much and until next time, I’ll see you at the table.