I know what you’re thinking, you sitting in your cubicle reading about board games because your planned profession of “YouTube board game personality/podcast mogul” didn’t work out and you had to get a day job. I understand dear reader, as I’m faced with this reality as well. Just because you can’t work in the tabletop industry doesn’t mean you stop thinking about games! So what do us board game junkies have to do when faced with the crippling reality of separation from our cardboard addiction for forty to eighty (here’s looking at you doctor) hours a week?! Well we scour the internet for articles of what other people think about the games that we’ve already made up our minds about. So without further ado let me provide you with a bit of daily distraction. A review of a brilliant new game from two time Kennerspiel Des Jahres winner Alexander Pfister, a game called: Great Western Trail. I want to jump right into some unpacking of Great Western Trail because as John Wayne said in one of my favorite western films, “We’re burnin’ daylight!”.

Great Western Trail is a medium to heavy Euro game that has players building decks of cattle, placing personal buildings, moving trains and delivering herds to Kansas City. On a player’s turn they will do three things: move their cowboy along the trail and stop at a location, take actions at the current location, and then draw up to their hand limit. Sounds pretty simple right? This game is easy….WRONG! Great Western Trail is deliciously complex. I want to make it clear that this game is not complex just for the sake of being complex. Every action, and every move feels like a decision that matters. There are three prominent directions to start with in this game. You can use Engineers to travel along a train track and deliver goods to stations along the way. If you like deck-building you can utilize cowboys to buy better and more valuable cattle, this helps you a number of ways but is also just straight points. If you like to build and provide yourself with unique bonuses you can also hire craftsman to build personal buildings along the trail. These buildings can provide you with better actions than all the other players will likely have, and your buildings will potentially give you a source of steady income if placed correctly on the board.

When you look at Great Western Trail and read the rules, it feels like there are a few mini games put together. I got the same feel in Mr. Pfister’s earlier design Mombasa (which still sits atop my list of Euro’s as one of the best). I read the rules to these games and think, “there’s quite a bit going on here. I wonder is this is going to work well?”. What you find after the first play of this game is that not only do all the mechanics work well together, Great Western Trail works like a well oiled machine. By the end of the game players are all taking their turns very quickly and the game flows easily. Not to say that the game flies by it is still a meaty experience that will take a couple of hours to finish, but you never feel bored and there isn’t too much downtime (which is rare in a weighty Euro of this depth). 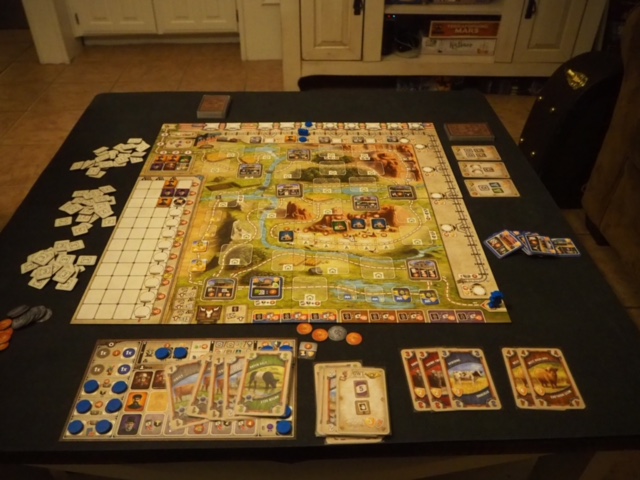 I want to go into a little more detail about what I see as the three main strategies of the game and what bonuses they provide. Now I don’t want you to think that there are only three paths you can take in this game. There are many roads to victory that can be supplemented by aspects of certain strategies. You may want to build one particular building for instance to allow you to hire more workers. You could then use those extra actions to hire more engineers and take a railroad strategy. This is how the strategies can work in tandem with each other. So let’s take a look at the three workers (in order of appearance on the player mat) and what benefits they can provide!

Ahh the cowboys. My favorite strategy to take and the one that has never paid out. Which most likely means that I’m not using the cowboys in the right way! Cowboys will help you hire better cattle and more cattle. The cattle cards are great because they allow you to have more and more valuable herds to deliver in Kansas City. Either way you will need to buy at least some cattle or else you won’t be able to deliver very far along the train track. When selling herds of cattle in Kansas city you want different colors and values of cattle to make the most money. You are paid the value shown on the cow for each different card in your hand. So you don’t want to have pairs. The only cows in each starting player’s deck are value two cows in Green, White and Black and a number of value one Grey cows. This means that even if you boost the value of your herd with all of your starting certificates the most value you can squeeze out of the best possible starting hand is ten. This would allow you to deliver to the first really good city to drop off your goods but after that you really need to start delivering more valuable herds. The only way to continue doing that successfully is to have more and different types of cows to sell. Cowboys make this very easy. The other nice thing about getting more cows is that cows have points printed on the front of them. When you buy a cow you are buying straight points. This can be very powerful. Overall the cowboy strategy seems like it should be very powerful but I have yet to unlock the secret to make it really shine after about six plays. 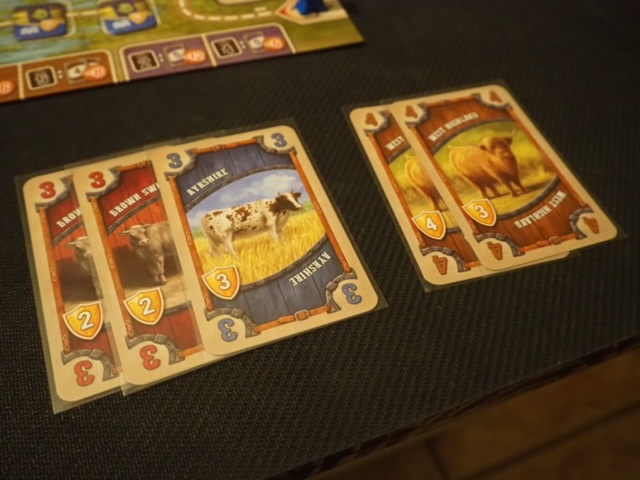 Craftsmen allow you to build your personal buildings which can be very good as well. The buildings you can build in your player color are only a benefit to you. These personal locations can allow you to have more powerful actions than all of the other players on the board like being able to buy cattle more than once or hiring more workers at a discount. In addition if you build at certain locations you can take special “risk” actions in addition to your building’s actions. These risk actions may be things like “discard a level 1 cow and move your certificate and gain money”. These bonuses are very strong and can really add up. Any other player that happens to land on your personal building cannot take the actions there, only an auxiliary action which is not an ideal situation. In addition to these actions only being available to you players may have to pay you money to pass the buildings you place. Certain personal buildings have hands on them showing that anyone passing that location has to pay you money if possible. If placed correctly these buildings can be a very powerful source of income.You can then use your ill gotten gains to fund your more powerful personal actions and buy more powerful cattle! Do you see the deliciously evil possibilities?! Mwah ha ha ha! Er…sorry I think I might have gotten carried away for a moment. Let’s continue yes? 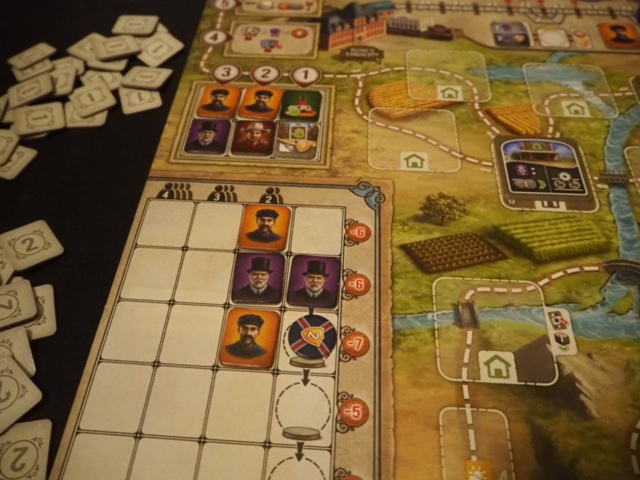 Engineers will allow you to move further along the railroad track and deliver to many of the stations on the way. In addition to the cities that you can deliver to you will also have the option of pulling off the tracks to a train station on the other side. If you stop at these stations they give you an opportunity to pay some money and deliver an extra disk from your player board! In addition to delivering the disk you will also be able to switch a worker on your board with one of the station tiles that are at each location. Station tiles will give you permanent in game bonuses or one time bonuses, and they also have some type of end game score modifier. If you manage to collect a good portion of the station master tiles the bonus can be substantial. The engineer player also tends to be further along the train track than everyone else which also saves you money when you deliver cattle so all in all this strategy can be very strong as well. 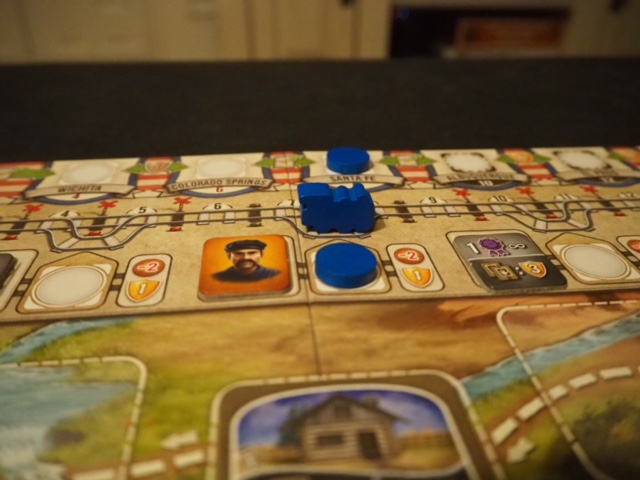 There are three workers in Great Western Trail but please don’t read this and think that I’m saying there are only  three strategies in the game. There are so many paths to take in Great Western Trail; these workers help to facilitate your strategy and play style, not dictate it. There is no scripted play here and no suggested path, the world is your mountain oyster and it’s up to you to find the optimal outcome. 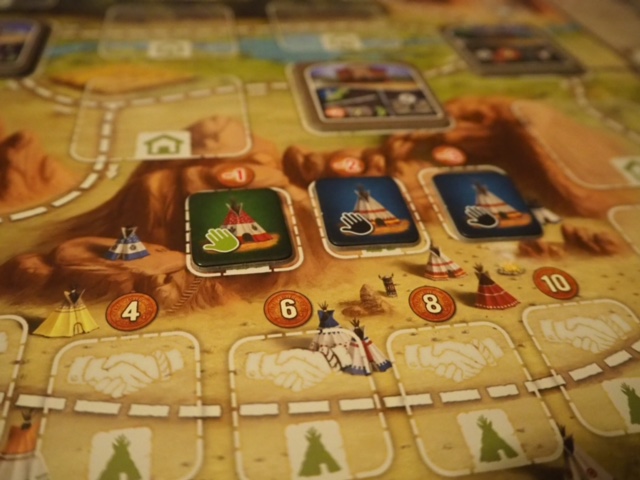 This is the latest from designer Alexander Pfister, and it does not disappoint. With Mombasa, Broom Service, Isle of Skye and Great Western Trail under his belt I think it’s safe to say that Mr. Pfister is one of the most impressive designers in the hobby today. Whatever he comes out with in the future I’m going to want to buy. I have that much faith in Mr. Pfister based on his previous works. It’s rare for a designer to earn my trust this completely as far as game quality is concerned but I have never disliked one of his games. Mombassa is one of my favorite Euros of all time, Isle of Skye is one of the rare tile placement game that I actually enjoy playing and Great Western Trail is creeping its way up towards my top ten of all time. 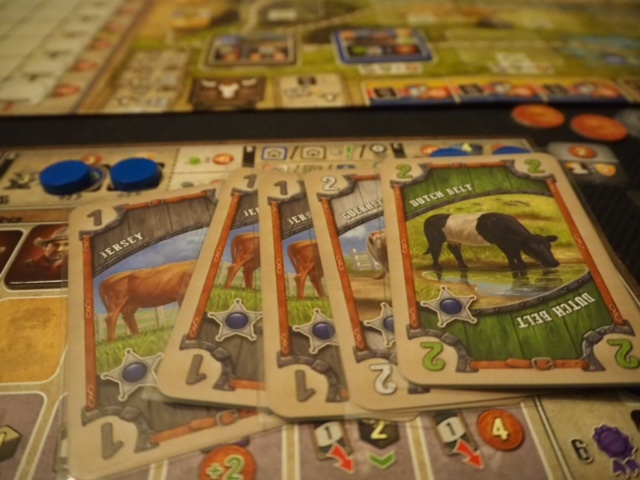 Great Western Trail is a heavier game and as such it’s not right for everyone. If you’re anything like me though and love games like Mombassa, Terra Mystica, Tyrants of the Underdark and other medium to heavy strategy games then this one is going to be a big winner for you. I can’t recommend Great Western Trail highly enough. It’s MSRP is $69.95 which is completely fair for the quality of game you will receive. It’s currently out of stock almost everywhere (because it’s so awesome) but will be on store shelves again soon. So do yourself a favor and pick this game up as soon as you are able, if you’re anything like me you won’t regret it. I’ve included a how to play video at the bottom of this article so you can see what the game looks like on the table and how it plays. If you have any questions please email thediceyreview@gmail.com. Until next time we’ll see you at the table.

How to Play, Spotlights