There are many games on the market right now that will advertise themselves as Deck Builders. “A deckbuiding game of combat and exploration” etc. The deckbuilding genre is one that is extremely popular due to the amount of flexibility that can be created with new cards, the low cost of production, and the possibility for tweaking and creativity.

There is another type of building mechanic out there that I find very interesting that not as many games have taken advantage of, and that is “Bag Building”. There are a few games out that can say that they have a “Bag Building” element to them, which is similar to deck building but with some slight differences. Today’s feature review is one of those games. The game that I’m referring to is Orléans, a worker placement, action selection, victory point salad romp that will absolutely keep you coming to the table again and again. I’m a fan of the way Orléans implements the bag mechanic and think that it creates a very interesting element of luck and planning. So how is this game played and what’s it about? Let’s take a look.

Each player will start off by selecting a color and taking the corresponding player board, starting workers, player meeple, track cubes and buildings. You will then need to set up the board and I will say right off the bat, if this game has a downside it’s setup. There are a lot of resource tokens and worker tokens and they need to be set up in a particular way. That being said I will also say that the game would lose some of its appeal to me if it wasn’t set up the way it was. It’s absolutely gorgeous and once the board is out with the resources and workers I get really into the experience and want to dig into the game play. Just know that the first time or two that you play it may slow you down a bit. After the setup you’re ready to turn over the hourglass tile for the round and begin action selection! 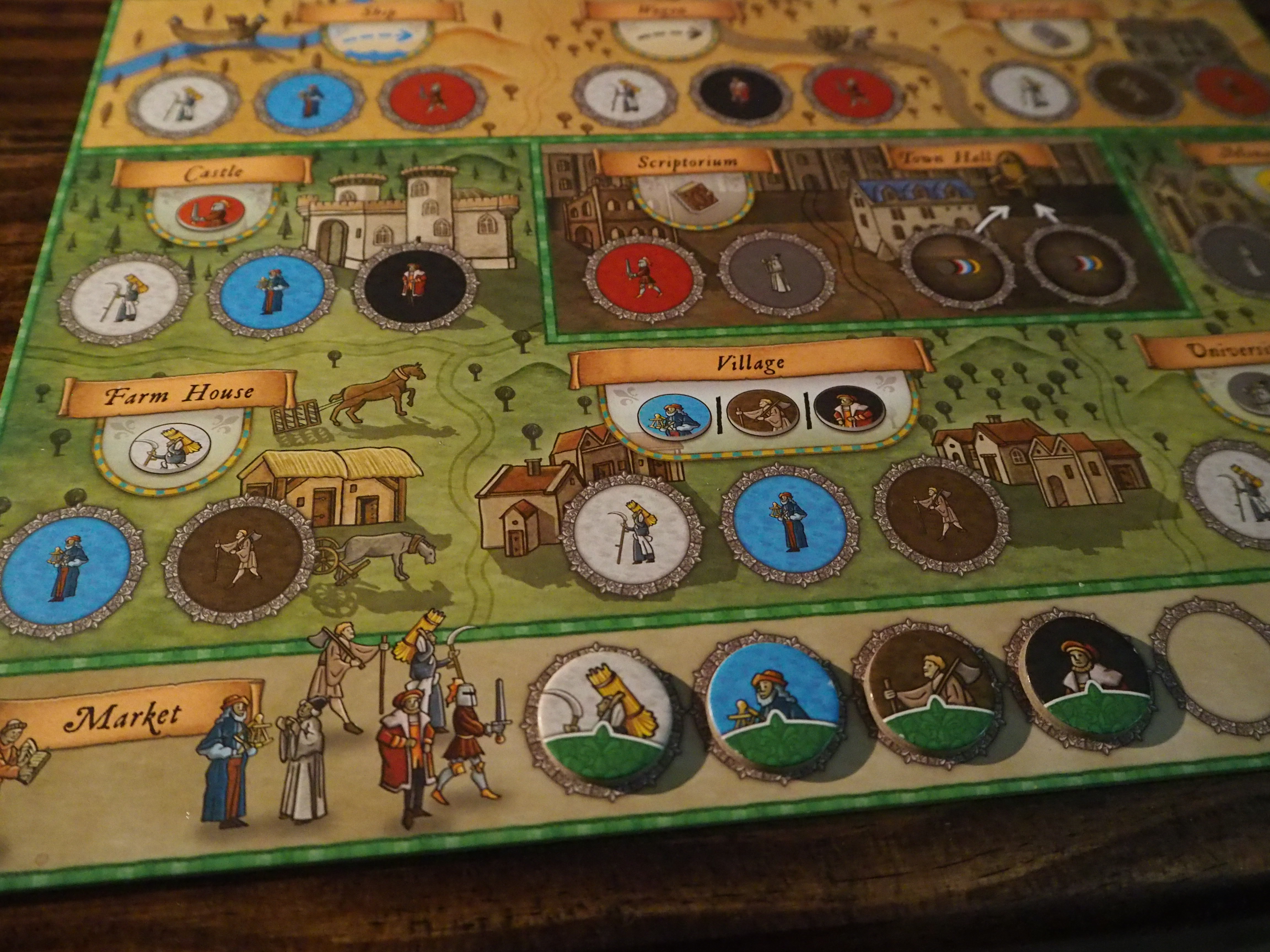 The above picture is a close view of the player board. This game can look a bit complicated but in reality the mechanics are very straightforward. On the player board above you will see empty spaces with spots for certain workers to be placed. To take these actions you simply fill in the empty spaces with workers that you draw from your bag and once everyone can no longer take actions the round is over and you begin the whole process again after resolving the hourglass tile for the round (this tile can be good for all players or potentially bad which creates some variability round by round). 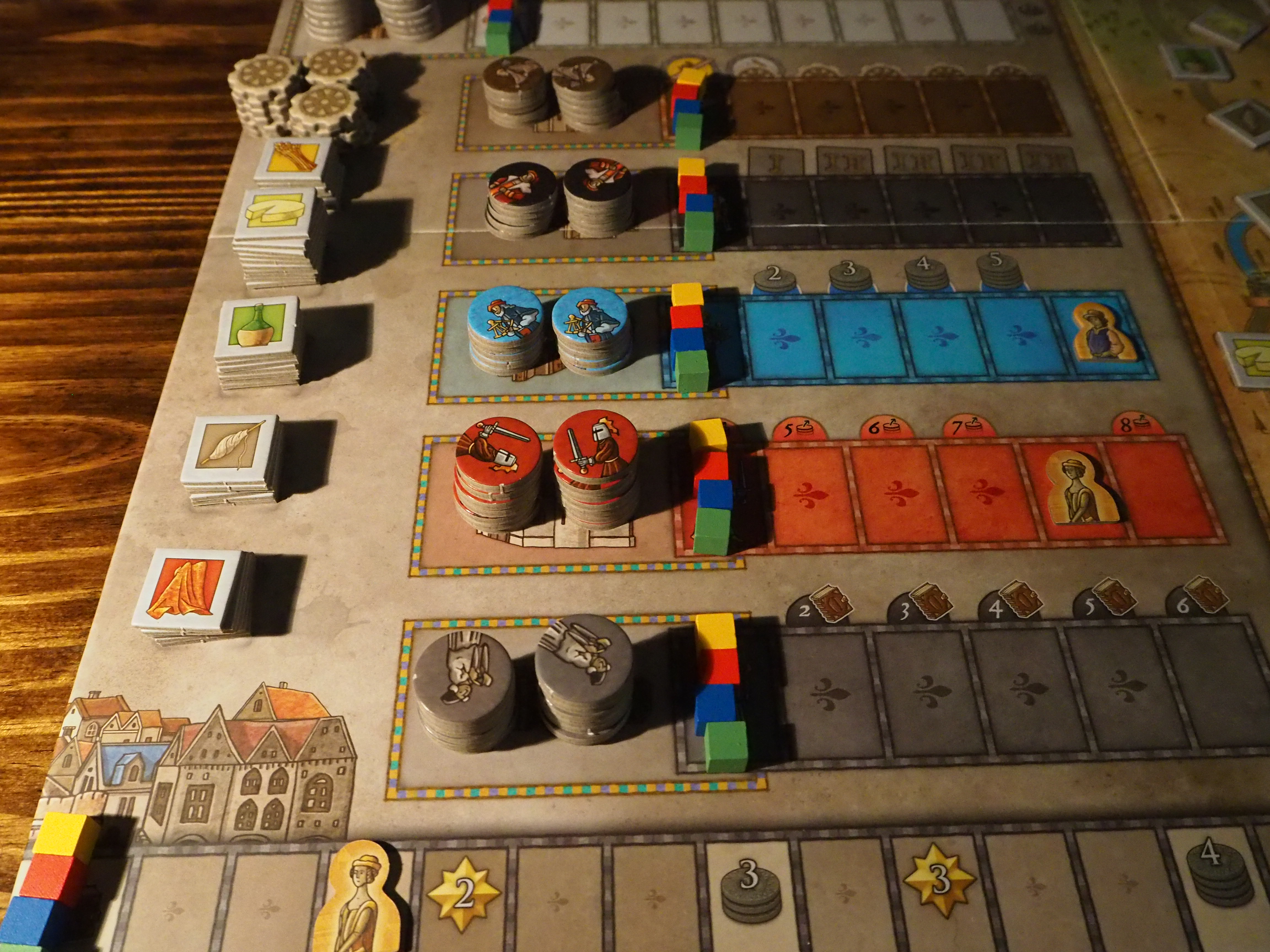 Each action that you might select in this game will either allow you to gain a new worker, money, knowledge, a new building, or a movement on the right side of the board. This is where the “Bag Building” element comes into play. When you look at the board above you will see cubes and available workers next to certain colors. Some of the actions that you select will allow you to take one of the available workers, move along that worker’s track and gain bonuses based on what type of action or worker you pick. For instance if you select the red knight, you will move up on the track that allows you to draw more worker tiles from your bag at the start of the round. This gives you more options and allows you to take more actions later in the round. If you select the Black Trader tile you can draw a building tile to expand your player board that will give you bonus abilities and more options to select. This will allow you to pursue a different strategy or follow a strategy more diligently. This is a large portion of the game and this section alone creates so many choices the player has to make and so many viable strategy that could lead to victory that it makes you want to try the game 10 different times just to experiment on worker recruitment strategies.

You also have character meeples on the right side of the board in the starting city of Orléans that incorporate another significant aspect of the game. On the right half of the board is a map with roadways, waterways, and cities. Three of the actions on your starting player board will allow you to move along these roadways and waterways, and build “Guildhalls” in the cities. (Provided no one already did that). When you pass goods on the road while traveling between cities you get to keep that good. The items you collect will be worth victory points at the end of the game and the buildings you construct will also be worth points.

This side of the board also provides a viable potential strategy that my wife and mother in law often use to beat me.

The last board to talk about is the “Beneficial Deeds” board. There is another board that you can send workers to that will give you bonuses in the form of knowledge or money and allow you to collect Citizen tiles that will be worth points at the end of the game as well.

Above is a picture of the “Beneficial Deeds” board. This action can be completed by going to the “Town Hall” action space on your player board. The last person to put a worker in the empty space on this board gains the citizen token and the end game points. You have to be careful though because the workers placed here are lost for the remainder of the game.

Are you beginning to see a pattern? There are a lot of ways to win this game. On the flip side of that coin there are a lot of ways to lose this game (as I can personally attest to). One thing I will say is that no matter whether you win or lose you will want to play again. The design of Orléans is fantastic and creates an atmosphere of tension and strategy that I have seen with few others. The more I play it the more I am loving the experience. From the first moment this game hit the table I knew I loved the art and the theme. As you can see from the pictures the renaissance style is so pleasing and well done. The gameplay is engaging and the strategies are practically endless. I ranked this game as an 8.5 on boardgamegeek and it has crawled its way onto my top 10 of all time. I’m fairly new to the hobby but of the games I have played this is very high on the list. There is a ton of depth and a good bit of complexity with this title so know going in there will be a learning curve. Absolutely pick this game up though. If you have the chance buy it and play it I don’t think you’ll be sorry. This is Orléans by Tasty Minstrel Games. I’ve posted a how to play video below just in case you don’t want to slog through a rule book. If you have any questions please email me at thediceyreview@gmail.com. You can also follow me on twitter at thediceyreview1. I hope you enjoy the video and until next time I’ll see you at the table!

How to Play, Spotlights