Ever since I was young I have been a fan of fantasy novels and movies. I read the Narnia series 5 to 6 times when I was a boy devouring any information I could find about the world of wizards and magic, goblins and dwarves, elves and dragons and all other manner of mythical beings. I read The Hobbit and the Lord of the Rings trilogy more than once and was so enthralled that I even took a go at The Silmarillion (which if you’re into Lord of the Rings you may know, but that book is not nearly as interesting I’m afraid.)

Then the day came when my mom’s dear friend Becky told me about a little boy named Harry Potter. Once I read the first Harry Potter novel I knew I wouldn’t be able to stop reading until I found out what happened to Harry and his friends. I devoured the books. In fact many times I would read the books until 3 in the morning under the covers and would get in trouble for staying up so late.

The idea of younger adults that were misunderstood and didn’t fit in finding a place where everyone was like them and they could study magic and have adventures was so appealing to me. Put aside for a moment the fact that J.K. Rowling is an unbelievably gifted story teller and the world alone was more interesting to me than any other series of books I had ever seen. The wizarding world had me hooked and I have always had a love of that style of universe.

If you’re anything like me and love anything related to wizards and the like then the game we’re featuring today will be right up your Diagon alley. The game I’m referring to is The Big Book of Madness.

The Big Book of Madness was released in English in December of 2015 and due to the glut of fantastic games from 2015 flew largely under the radar. Today I’m hoping to change that in a very small way! In The Big Book of Madness you play a young wizard pupil who has released a slew of nasty creatures by opening a very powerful book in the school’s library. The book is a prison in which monsters are trapped, and by foolishly seeking greater power you have set them free. You must learn spells from the library and use your knowledge to fight these creatures or succumb to the madness that surrounds you. 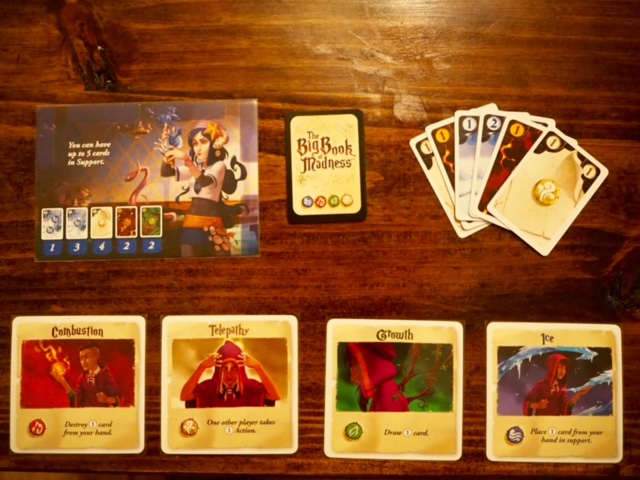 The Big Book of Madness is a cooperative deck building game. Over the course of 6 rounds you will purchase new spells to use, cure curses that the monsters release, cure madness from your deck, and help your wizard friends defeat a host of potential enemies. All of your actions require elements to be activated. Your deck is built of various element cards that you can purchase from a marketplace. You can either choose, Earth, Air, Water or Fire to build your deck. The more elements you buy the more powerful your deck will become because you can buy higher value element cards. You start with mostly level one cards, and as the game progresses you can buy level two or three element cards that will accomplish more per turn. You have a hand of six cards so the higher the number you draw the better for your team.

You will also pick a character to play and this character will have a unique combination of elements that make up their starting deck. Your character will also have a special ability that only they can use. Once per turn you can do things like use a power 1 Air element as anything you want, or potentially cure a madness card from the top of your deck for free etc. These powers can affect how you build your deck and create an interesting choice in your strategy. At the end of the game you are trying to defeat one last monster to be victorious, if you cannot you have failed and are lost to the madness!

Overall this is a lighthearted easily accessible romp for anyone that plays. If you haven’t ever experienced a deck building game and don’t want to try to wrap your head around the strategies of a 500 card deck building masterpiece, this might be for you! I thoroughly enjoy playing this game and my wife who is not a fan of deckbuilders was a fan of this game as well. The theme of the game is very enjoyable (who doesn’t love being a fledgling wizard?), but I also found that there was a deep level of strategy required to be successful in this game. I will say that playing with more players may make this game more interesting with some of the mechanics that we saw but even at 2 players we had a blast.

When setting up the play area you will pick a random selection of monsters to create the book of madness, you will also select a random assortment of available spells to purchase so with the different combinations available there is a high level of replay value in the box. At an MSRP of $39.99 I think you will get your money’s worth with this purchase. You can also purchase this online at coolstuffinc.com for $26.49 and at that prices it’s a steal. 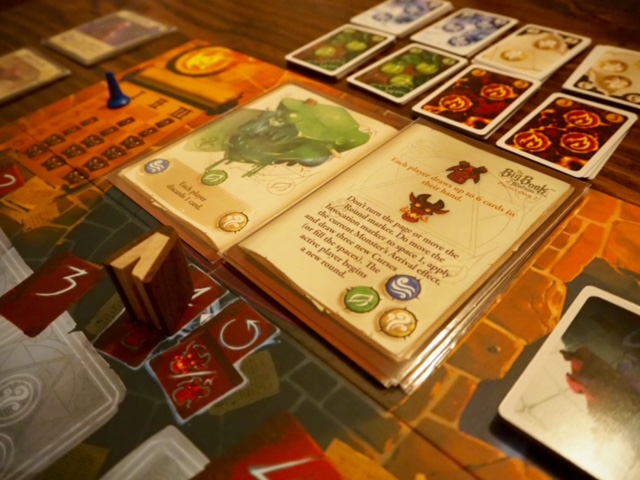 Overall I would highly recommend picking this game up if you’re looking for a fun family game night that will encourage lots of communication and creative thinking. Iello Games also confirmed that an expansion is in the works for future release that adds a whole new mechanic to the game to increase replayability even more! So if you’re looking for a whimsical and enjoyable evening with family and friends go look for The Big Book of Madness, you won’t regret it! I hope you’ve enjoyed the review, I’ve posted a how to play video at the bottom of this article. Thanks for reading and until next time I’ll see you at the table!